On the 3rd day of Christmas, Brumotions gave to you…

This weekend saw the final of X Factor 2014, a series which has seen highs, lows, 8 boys standing in a row, oh and Stevi Ritchie.

X Factor season 11 has been hotly contested from the outset and climaxed to a competitive final between Ben ‘Sexy Rock God’ Haenow and Fleur ‘She’s got it all’ East!

Like the rest of the British nation, us Brumoters were left on the edge of our seats and we just couldn’t call the outcome.

After an array of stellar performances, Ben was crowned X Factor king, with his winner’s song – ‘Something I need’ which was originally penned by One Republic!

Something I need is a perfect track to showcase the raspy, yet soulful tone of Ben’s voice, which we loved from his initial audition.
Compared to the original, Ben’s version is just that little bit more upbeat and is one of those tracks you find yourself singing in the shower or after having one too many drinks at Christmas.

The Question is, will it achieve Christmas Number One, or will Ben get pushed from the top spot by Mark Ronson and Bruno Mars’ newest collaboration Uptown Funk.

Syco will be donating 100% of it’s profits from the single to ‘Together for short lives’ – So get your copy now!

American pop-rock band OneRepublic are back with their incredible new track ‘Love Runs Out’, which will be released in the UK on August 3rd.

The track was originally intended to be the first single on the group’s third album Native, but the release was delayed due to the track not having a chorus written. But the wait has been worth it as the track is incredible and released just in time for the Summer!

If you’ve been keeping up to date with our amazing Playlists of the Week, you would’ve seen this incredible track included in a Playlist back in June!

‘Love Runs Out’ is completely different to the incredible tracks that this chart-topping group have released before and yet it’s just as incredible and catchy as those tracks that we’re sure we’ll be blasting it for a while.

The track’s pace reminds us heavily of Kanye West’s track Love Lockdown, however, singer Ryan Tedder brings a touch of uniqueness with his incredible vocals, which makes this track a touch more addictive to listen to it on repeat!

The tune has a minimalistic, 70s rock and soul vibe driving the track with Tedder showcasing the vocal acrobatics that have made the group a popular household name.

‘Love Runs Out’ is the perfect track for OneRepublic to debut a new sound to their audience as it will no doubt be successful!

The group are incredibly talented and we believe they will reach great success with their newest track and we wish them all the best!

‘Love Runs Out’ is available for pre-order and is out August 3rd!

And if you haven’t already, make sure to check their video for the track out below:

It’s back and still as incredible as always! That’s right people!

It’s the BRUMOTIONS PLAYLIST OF THE WEEK!

Featuring BOTH our own and YOUR favourite artists!

Including Loveable Rogues! Who a few of our Brumoters received the opportunity to see live during the FutureProof party at the Islington Academy in London!

Check out the Playlist below! And don’t forget to suggest some tracks of your own to feature in our next playlist!

With two singles already under their belt and a few fans here within Brumotions (Totally not ashamed to admit this!), we wanted to share with you, the incredible Janoskians (Just Another Name Of Silly Kids In Another Nation) and their newest single! 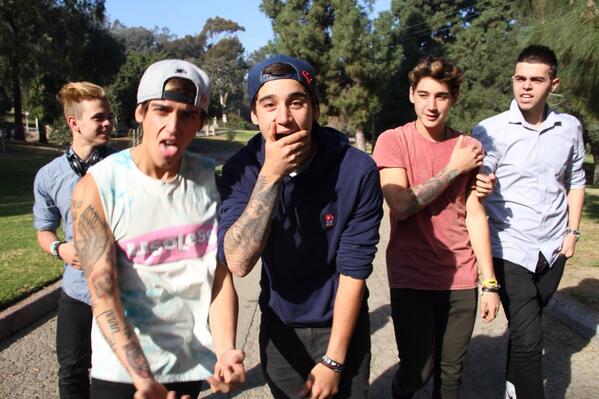 The boy’s newest single ‘Real Girls Eat Cake’ was released on May 11th and is an incredibly catchy number with an inspirational message woven into the track, endorsing positive body image: ‘I don’t need a girl to worry ’bout a thigh gap. I like the fact that you don’t give a sh*t about that. I like a girl who eats more than salad on a date.’

Consisting of Daniel ‘Skip’, Beau, Jai, Luke and James (L to R), the boys have previously performed in major cities across the US, Europe and their homeland Australia.

However, soon after the announcement of their newest single, the lads announced a UK tour!

That’s right people, for those who were unable to see them the first time, don’t worry as you can now see the boys in a range of locations across the UK as you can see below:

The Janoskians are not only releasing a number of fun and catchy tunes which will sound amazing on tour, but they also love to have a laugh like a normal group of lads, which can be seen in their various prank videos on their YouTube channel.

With a dedicated worldwide fanbase, these boys clearly show why they’re well loved with the hilariousness of their videos and catchy tunes being released under their record deal with Republic Records, the newest release of which has charted in a number of countries.

Make sure to take advantage and see these incredibly hilarious lads on their headlining UK and Ireland tour in August and September!

And why not check out their newest music video and some of their other hilarious videos below: