We Brumoters love a good sassy, group of musicians and our recent obsession Marianas Trench are no different!

Not only are these lads able to pen incredible songs (most with a hint of sass – including their newest tune Pop 101, which references Justin Timberlake, Ke$ha, Mumford & Sons, Jason Derulo and more!), but they’re also pretty sassy on Twitter! 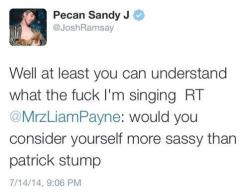 The Canadian pop rock band is made up of (from Left to Right) – Mike Ayley (Bassist & vocalist), Josh Ramsay (Lead Singer & rhythm guitarist – who also helped pen Carly Rae Jepsen’s summer hit ‘Call Me Maybe), Ian Casselman (Drummer & backing vocalist) & Matt Webb (Lead guitarist & vocalist), who we believe are going to take over the UK with their incredible tracks (though this is as soon as they decide to come to the UK… that’s right lads, we’re waiting!).

Although a few of our Brumoters had found this group nearly 7 years ago, when the band released their debut studio album – they only recently re-discovered the band after the release of their latest tune

And they lads are yet to officially release their albums and tour over here in the UK.

Though if the group are to announce a UK/European tour, we will announce the details for you all!

With three albums and two EP’s under their belt, the band have a large arsenal of amazing tracks for you all to check out – like Shake Tramp (the video is just as hilarious as the track title) and Desperate Measures, both of which you’ll be able to listen to via the video below!

The group’s most recent track ‘Pop 101’ is currently available to purchase on iTunes & Amazon, so why not listen to it below before purchasing it!

It’s the BRUMOTIONS PLAYLIST OF THE WEEK!

And this week we have another 12 INCREDIBLE tracks!

And as always, it features BOTH of our own and YOUR favourite artists!

Including FutureProof! Who invited a few of our Brumoters to their party/gig at the O2 Islington Academy in London! (You can feast your eyes of a number of reviews from the gig starting tomorrow!)

Check out the playlist below! And don’t forget to suggest some tracks of your own to feature in our next playlist!

Looks like we’re at that time of the week again!

So here is this weeks, BRUMOTIONS PLAYLIST OF THE WEEK!

Featuring a load of our favourite artists!

Including Kingsland Rd, who featured in one of our special Introducing articles!

Check out our playlist and suggest some tracks to feature on our next!